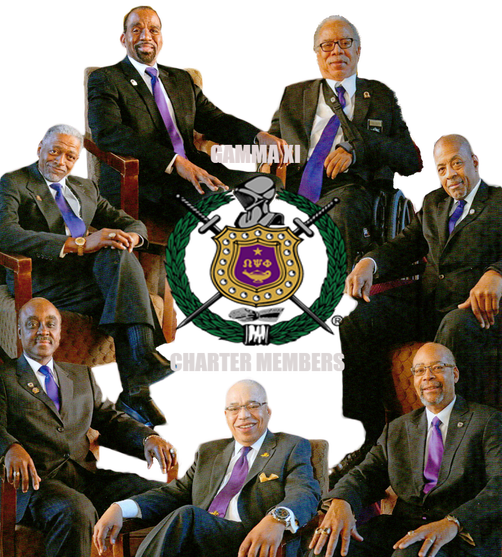 ​During the first meeting, the arduous task of assuming the helm and chartering the chapters course fell on the capable, broad shoulders of Carl Haywood who was elected Basileus. The following brothers were elected to the offices listed to assist him: Hilary Jones (Vice Basileus), Richard Hooker (joining just weeks after the chapter was chartered), (Keeper of Records and Seal), Marvin Whitehurst (Keeper of Finance), Robert Fairchild (Parliamentarian), Bishop Perry (Chaplain), Gary Clark (Editor), and James Dixon (Keeper of Peace).

Gamma Xi made plans to herald and proclaim its presence in Virginia Beach with dignity, style, and class. Nothing less than Virginia Beach's premier hotel at that time - The Cavalier - would suffice for the gala banquet commemorating the founding of the new chapter. On May 28, 1976 at 7:45 PM, The Cavalier, resplendent in the golden hues provided of the setting sun, provided the perfect venue for the city's mayor, the Honorable J Curtis Payne, Bro. Gene Carter, and Bro. Bernard McKie then (Basilei of Lambda Omega and Pi Gamma) to greet the new chapter and its family and friends.

Following the keynote address by Bro. Harold J. Cook, Bro B.T. Garnett presented the charter to the chapter and Bro. Charles Chambliss, Jr., 3rd District Representative, installed the first officers. "O how good and how pleasant" it was to hear our beloved Omega Dear ubiquitously resound through the banquet hall as the climax to the evening's festivities.

During its formative years, Gamma Xi became a life member of the NAACP and established annual programs and activities, which included but were not limited to James Dixon (Ω) and Calvin Sears (Ω) Scholarship Fund, Charles Drew Blood Drives, The Labor Day Boat Ride, and the Halloween Party for Youth in addition to the fraternity's mandated programs - Achievement Week, Talent Hunt, etc.

​Also during this period, Gamma Xi enhanced the Omega Spirit by aggressively supporting other chapters in the area. The chapter moved its meetings from a free non-profit facility to the Norfolk Omega House, operated by Lambda Omega Chapter. Consequently, the two chapters began to wholeheartedly embrace the activities of each other and more joint activities were implemented. In 1980, the Chapter was instrumental in the establishment of Tau Lambda Chapter of Old Dominion University through the induction of five candidates. In 1986, the chapter celebrated its tenth anniversary by hosting the 53rd Third District Conference.

Highlighting its 20th anniversary, Gamma Xi exuberantly embraced the delegates to the 63rd Third District Conference on April 18, 1996. Under the capable and aggressive leadership of brothers Anthony Knight (Basileus), Corwin Hayes (Vice Basileus), John Jessup (Keeper of Records and Seal), and Willie Harris (Keeper of Finance), the chapters' 38 financial brothers with their diverse educational and vocational experiences, show casing an excellent reflection of the plethora of young professionals in which Hampton Roads abounds, proved once again that "Eight men thoroughly immersed in the true Omega spirit are far greater assets than eighty with lukewarm enthusiasm."

Gamma Xi’s aggressive and careful balance between reclamation's and inducting new members has increased productivity and heightened the fraternal spirit, which unites the chapter. The Brothers of Gamma Xi continued to work hard to serve and to uplift the community. This was accomplished with established and newly added programs including but not limited to: Adopt-A-Highway, Adopt-A-Nursing Home, Big Brother Program, Voter Registration Drive, VAMI walk, American Diabetes Walk, the “Omega Cup” golf tournament, the Sickle Cell Walk-A-Thon and The Gospel Uplift Scholarship Concert.

Following the Centennial Celebration of Omega Psi Phi Fraternity, held and celebrated in 2011 in our birth place of Howard University while under the leadership of John Jessup (Basileus),Antoine Hickman (Vice Basileus), Kevin Blount (Keeper of Records & Seal), Kenji Ridley (Keeper of Finance) and Reggie Matthews (Ways and Means Chairman), the chapter established the Gamma XI Uplift Foundation a 501(C)(3) entity to provide Uplift to the citizens Hampton Roads. With this foundation the chapter launched a highly successful program which became well attended by both citizens and brothers throughout the 3rd District for one of Many Stop the Violence Breakfast Events supporting the YWCA and Samaritan House.

The chapter’s roll in 2012 now having over 50 enthusiastic brothers led by Bro. Wm. Terry Calhoun (Basileus) (District Keeper of Finance), Bro. Gregson Ferebee (Vice-Basileus), Vincent Walker (Keeper of Records and Seal), Keith Yarborough (Keeper of Finance) continued forward momentum with the fraternities initiatives. Unfortunately during this time the chapter lost our beloved Brother Jerome Alston (Ω) and added his name to the Annual Golf tournament to keep his memory alive and raise funds to support the youth of Virginia Beach. During this time the chapter rekindled a dormant mentoring program to assist in inspiring young men to reach in their potential and as future leaders via the Golden Fold mentoring program.

​Highlighting Gamma Xi’s 40th Anniversary, our chapter stepped forward to host the 83rd Third District Meeting on April 14-16, 2016 providing continued Friendship and Uplift in the District. Gamma Xi chapter and the Gamma Xi Uplift Foundation a 501(C)(3) entity) remains dedicated to fulfilling its mission of community service while continuing to march boldly into the 21st century, (1) enriching the community; (2) humble, obedient, and steadfast service; and (3) providing friendship, which is essential to the soul.

In 2017 to present day under the leadership of Bro. Turan Smith (Basileus) John Jessep (Vice-Basileus), Michael Banks (Keeper of Records and Seal), Reggie Matthews (Keeper of Finance) the chapter continues its quest staying true to being thoroughly immersed in the Omega spirit by providing direction, continued Friendship and Uplift bound by our cardinal principals for which we live daily. We thank these Men of Omega for their dedication, knowledge, and burning the flame that continues the tradition of our beloved Omega Psi Phi Fraternity, Inc. and chapter.